A study by AFRY Management Consulting confirms the clear advantages of hydrogen production at sea. Thus, it supports the approach of the AquaVentus initiative in the German North Sea compared to other system options in terms of costs, environmental compatibility and implementation time. AquaVentus aims to produce 1 million metric tons of hydrogen offshore in the waters off Heligoland by 2035 and bring it ashore by pipeline.

Within the scope of the study, the AquaVentus concept of hydrogen offshore production with transport via a collection pipeline was compared with alternative options involving offshore electrolysis and ship transport or offshore electricity generation and onshore electrolysis. The advantages and disadvantages of the options were evaluated on the basis of cost, implementation time and environmental compatibility.

In all three dimensions examined, offshore electrolysis with pipeline connection emerges as the best approach: According to the study, a pipeline for hydrogen generated offshore can be realized up to five and a half years faster than submarine cable connections for offshore electricity, which would then be used for electrolysis onshore. The energy development of particularly remote areas in the exclusive economic zone could thus be accelerated considerably. In addition, the investment would require up to 6 billion euros less, reducing the production costs for green hydrogen. From a permitting perspective and with a focus on environmental protection, 610 kilometres of pipeline versus 3720 kilometres of high-voltage lines as well as the location of electrolysis on the high seas also mean significant advantages in terms of environmental impact, including in the particularly sensitive Wadden Sea ecosystem. The option of ship transport has proven to be barely feasible simply because more than 100 ships would be required.

Chairman of the association, Heligoland’s mayor Jörg Singer: “Our member companies, which now number 96, have been convinced of the AquaVentus vision, and work is underway in projects to implement it. In this context, the study now published impressively proves that the AquaVentus concept is faster, more environmentally friendly and less expensive than the other investigated concepts.”

According to the AquaVentus Association, the vision of 10 GW of offshore electrolysis capacity by 2035 now requires swift implementation. But for this to happen, important political decisions still need to be made:

“Policymakers now need to clearly commit to offshore electrolysis on the high seas in order to harness its potential. The current update of the national hydrogen strategy offers the opportunity to set a clear roadmap for expansion and to establish the necessary trust. In concrete terms, it is also necessary to define further energy generation options as part of the site development plan. Moreover, government support for ramping up the technology to competitiveness must be designed as quickly as possible.” 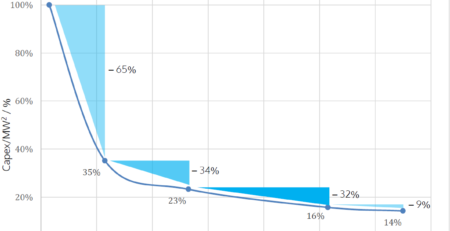 Thrust for the hot phase

Four other companies are interested in hydrogen production in the North Sea The AquaVentus Support Association welcomes four new members...