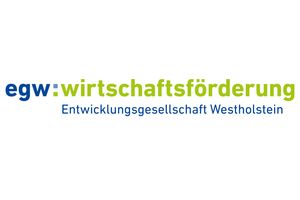 The Entwicklungsgesellschaft Westholstein(egw) works on behalf of the counties of Dithmarschen and Steinburg and the city of Brunsbüttel for the economic and infrastructural development of the region on the west coast of Schleswig-Holstein.

Among other things, egw promotes new settlements in Schleswig-Holstein’s largest industrial area, the ChemCoast Park Brunsbüttel, but also at other locations in the region such as Büsum, Heide, Glückstadt and Itzehoe. Likewise, development projects of already resident companies are supported, which serve, for example, a more sustainable industrial production as well as the increase of energy efficiency and competitiveness. In addition, egw:wirtschaftsförderung is the interface to the political and administrative stakeholders in Schleswig-Holstein as well as being involved in technology and start-up centers in Dithmarschen in a managerial capacity.

The egw:technik department of the Entwicklungsgesellschaft Westholstein deals with central infrastructure issues in the region. In addition to securing the supply of drinking water in the economic area as operator of the Wacken waterworks special-purpose association and the drainage of the Brunsbüttel industrial area, this also includes sustainable district heating concepts. Special attention is also being paid to expanding broadband coverage in Dithmarschen. As the operating company of the Dithmarschen Broadband Association, egw:technik ensures that a fiber optic network is set up to effectively promote digitization and thus the future viability of the Dithmarschen and Steinburg economic region.